Hetty Heritage Mouse has been out and about exploring around Tarves. One of our volunteers noticed that she had gone missing from the museum but then we started getting postcards from her. On each postcard she asked us to try and work out where she had been and to answer some questions about each location. (Hetty loves to play games!)

If you would like to explore the places that Hetty went to and answer her questions then you can print off the postcards below. Hetty spent several days scampering around on her adventures and she did tell us to enjoy the views and take some cheese or other nibbles because some places are quite far away and you might get hungry.

Hetty is now back in the Heritage Centre and if you're standing at the gates then look carefully and you will see her peeking out of the window.

If you would like to share some photos of your adventures whilst looking for Hetty's postcard places (You might want to take a cuddly animal with you to enjoy the adventure!) then please email them to tarvesheritage@outlook.com or message them to the Tarves Heritage Project Facebook page or Instagram page.

If you need to check the answers then you can download them here too.

Print off the quiz below and take a walk around Tarves Village. Can you find all the answers? Come into Tarves Heritage Centre and ask one of our volunteers if you would like to check your answers.

We had a stall at the school fete and lots of people showed an interest in the work that we do at the Heritage Centre. We also provided some old games for children to try out!

We Will Remember Them

Tarves War Memorial was unveiled on 23rd April 1922. No fewer than 80 young men from Tarves and Barthol Chapel, most of them not yet 20, laid down their lives in the First World War. The photo below shows the unveiling of the War Memorial.

The concert on Friday was a resounding success, THANK YOU! to all who contributed and special thanks to Jane Cattanach who was chief organiser!

Many photographs were taken and it is rumoured that there may even be a film made of the night!

£450 was raised and this will be shared between Tarves Heritage Project and the Red Cross.

The Museum is still open every Thursday-Sunday, from 2-4.30pm until the end of October. Come along and have a look at our WW1 displays, many of the artefacts have been given to us on loan and have a connection with the local people and villages.

The Queen's Room, in the Melvin Hall , Tarves was packed out on Friday 21st February with a capacity audience including 13 "babies"! They had come to listen to a Tarves Heritage Project Winter talk given by Mark Andrew, Haddo Estate Factor.
Mark gave a fascinating insight into life at Haddo House during the Second World War when the property was transformed into a maternity hospital from 1939 to 1945. Both local women and evacuees from Glasgow used the facility. Over 1200 babies were born at Haddo during this period and they have since been nicknamed the “Haddo Babies” in light of their unusual birthplace. The Marquess of Aberdeen gave at least a sixpence to each of the 'Haddo Babies', which added up to quite a bit over the four years that Haddo operated as a maternity hospital!
Moira Minty, Tarves Heritage Project Secretary said "It was a popular talk and it was lovely to welcome some of the Haddo Babies who each have a very different life story but who all have a special connection to Haddo"

We held our Burns Supper fundraiser on 31st January. Jim McColl led the speakers with great humour and musical entertainment was supplied by talented locals. Our grateful thanks to everyone who participated in the evening and to those who supported by attending. We depend on such events to cover the running costs of the Centre.

A former teacher at Tarves Primary is having a book launch to celebrate the school's 100th Anniversary.

James Stott said, "To mark the school's one hundred years, I set about finding out about it's history. Current pupils, former teachers, head teachers, staff and former pupils provided contributions. The result is fascinating. You can read about it through the words of those who actually attended and worked in it. I am indebted to the Tarves Heritage Group by providing access to information and resources- there are many interesting tales and lots of lovely photographs"

The book costs £14 and will be available in Tarves and Ellon.

The official Launch will be in the Tarves Heritage Centre on Sunday, December 9th between 2-4pm

A great turnout, with the Melvin Hall full to capacity. The Ythan Fiddlers provided the entertainment for the evening and everyone enjoyed folksongs, stories and a variety of traditional dances with a few newer ones thrown into the mix.

Norman Glen , Chairman of the Tarves Heritage Project, said, "We had a wide range of ages from 86 down to 8 and everyone had great enthusiasm!" Adding "The evening was a great success and raised nearly £900 before expenses, which will help us heat our building. We are very grateful and, on behalf of the Heritage Project, I would like to thank the Ythan Fiddlers, and to the people of Tarves, friends and family who contributed to a wonderful evening"

A film has been produced by Tarves Primary School P6/7. The Heritage Project provided information about local history and assisted with the filming. The DVD is available for viewing in the Museum. Copies of the DVD can be purchased from the Museum, all proceeds will be shared between the school and the Museum.

Rain stopped play! We try to keep the Stone Circle clear of long grass but it took a while before we had a dry evening this year! In the end it turned out to be a beautiful evening, with huge dramatic skies and a golden light.

18th September - An intrepid group of volunteers spent an afternoon working on the footpaths in the woods above Tarves Village. There are several interesting paths running through the wood but some of them can get very "boggy"!. Some drainage pipes have been put in already but more were needed. Spades and mattocks came in handy but in the end it came down to sheer muscle power and a lot of enthusiastic hard work. Thanks must go to Chris and Tamsin for their expertise in path building and for providing some delicious refreshments! 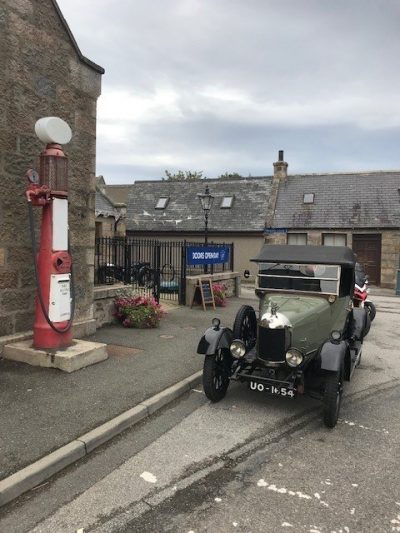